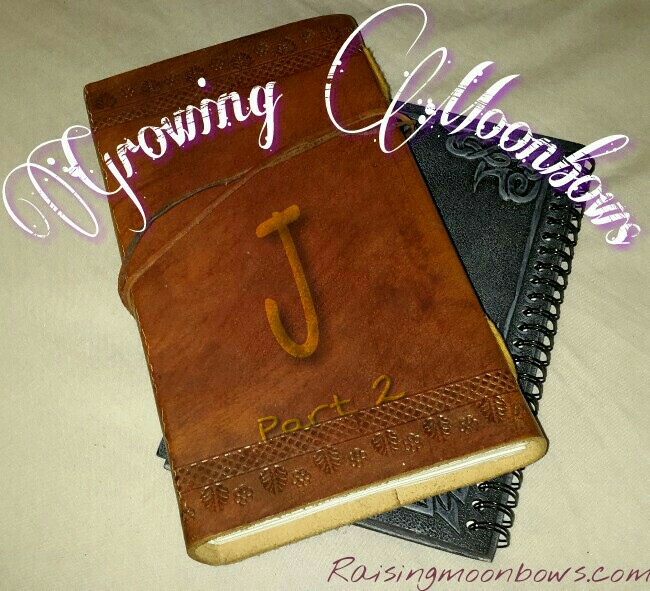 Growing moonbows are never easy, it takes a dash of hope, a sprinkle of magic and a bucket full of madness. This is the story of J, a series of letters written while on the rollercoaster of pregnancy.

Are you ok or is this the end of our journey?

So tomorrow is the day we find if you are growing or not, and I fear it will be not be good news. I am hoping for some kind of miracle though, and as a lovely midwife once told me, never give up hope until it’s over.

I need to step away from Google as all but one story I have read has confirmed my fears, although I’m holding on to that one story that ended in a successful pregnancy. Can we really be that lucky?

It is still November but I have all Christmas presents brought, wrapped and the tree is up. We have your brother this Christmas and I know if tomorrow isn’t positive it would crush me and I won’t feel very festive, but I can’t spoil Christmas for him.

I am hoping for a miracle tomorrow against all the odds, you are there and growing.

I woke up today feeling so anxious, not really wanting to drive to the hospital as I feared the worst. Sometimes ignorance is really bliss. Daddy and I did do the trip down to be scanned, and I couldn’t stop analysing the situation we are in, the unanswered questions

Could I really have tested positive at only 3 and a half weeks pregnant as the scans have so far suggested?
This really looks like a blighted ovum and I’ve had one before that didn’t result in anything positive ?
I really have no symptoms of being pregnant still, this has to be a bad sign?
Why am I thinking this time would be any different to the last 15 ?

By the time we got to the hospital, I was shaking, quite scared cause the internal dialogue had me in an emotional knot. The lady who scanned me two weeks ago called me into the room – This was it.

She asked me if I was ok, cause I was as white as a ghost as I laid on the bed. She put the gel on my stomach and started to look for you. She was looking for some time when she asked me to go empty my bladder as we need to have a better look internally. I do have a lot of scar tissue from  many operations but I didn’t think of that at the time  I was on auto pilot as I got up and went to the loo, my mind now set on it all being negative. As I closed the scan room door I heard your Daddy and the lady talking, though didn’t really hear any words just noise.

I came back in and she started scanning looking for you, she showed me the sack,  but this time it had a yolk sac inside, but nothing else . My heart sank for just a moment then she moved the probe slightly and OH MY there you were, flickering heart beating measuring 10mm long !

As soon as I left the room, I took a picture with my phone of the photo and sent it to your Aunty, because although she tried to sound positive to reassure me two weeks ago, I could see her thoughts written on her face. But you are there! 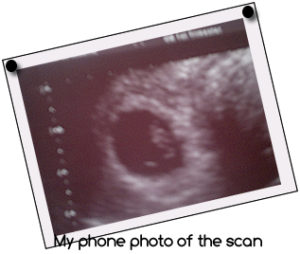 On the drive home, Daddy was telling me that the lady could see you when doing the scan on my stomach but due to the scar tissue it would be hard for her to show me, she didn’t want to just tell me everything was ok, as she knew my history, she wanted to be able to show me. Therefore the internal scan enabled her to do so. The rest of today I have been wandering around in a bubble of happiness. We have a long road ahead but at the moment you are doing well.

I’ve cried so much this evening but they are of happiness!  Please stick in there and grow little baby.

Another peek at you!

At my appointment today, we got to see you again, and you have grown so much. Your now 21 mm  and your heart is beating nice and strong. I have been given further injections to give myself each day, these needles are a lot bigger than my insulin ones, and because it’s heparin, it will most likely bruise. I don’t care because if it means your chances are higher of making it, then I’ll do whatever it takes.

Although I have been seeing the midwives for a while now, they have given me a date for my booking in appointment, I will be 13 weeks pregnant. This is good but it’s a little scary at the same time, as I have never made it to a booking in appointment yet.  I’m trying to keep positive though and we are only a couple of weeks off getting to 12 weeks.

We can do this, you and me.

Can’t we have some smooth sailing at all?  I woke up in the morning to find I had some bleeding again!  I was really scared, so curled up back in bed and rang my boss. I explained the bleeding and said I would work from home and let him know later once I have spoken to my midwife on what advice they give me. After speaking to them, I was told to go to the emergency section of the woman’s hospital. So I got in the car and drove down, feeling so emotional and scared, your Daddy came with me.

I got there and went to the reception desk, filled out the forms and then sat and waited. I got called in and I explained what’s been happening, even though I had seen you last week they decided that because of my history, they would scan and check to see if everything ok.

Each minute felt like hours until I was taken to the ultrasound room, my mind was racing with all the possibilities. Laying down on the bed, I felt I could hardly breathe with nerves of the unknown,  but finally, I could see you again and most importantly your little heart flickering away. They measured you and you were right on target!  They couldn’t explain the bleeding and said everything looks ok for now but if the bleeding changes come back. Leaving the hospital was full of mixed emotions, glad you were safe in there but scared in case the bleeding got worse.

I was so glad a few hours later when the bleeding stopped.

We have had Christmas at your Aunty’s place. A few days before Christmas, we picked up your brother from his Mum’s and although we had a couple of days until we hit 12 weeks, we decided to tell him about you. We were given your due date a couple of days ago at the last scan. He was pleased but said he hopes you are a boy!

We had a lovely Christmas day, and there was even snow laying on the ground. All I thought about was next year, it could well be your first Christmas. To have you in my arms would be all I could wish for. I got quite poorly in the afternoon on Christmas day, and from what the doctors said today it seems it was either flu or swine flu, we saw him because daddy got it too and he had issues with his chest in the past, so it was best to get seen. We are both on our way to getting better.